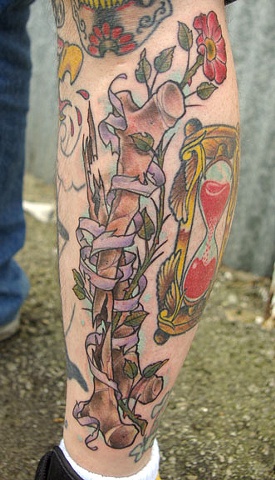 Tattooing is weird. there are all sorts of rules that outsiders are not supposed to break, yet we as tattooers break all the time. for instance that aftercare speech we give you? most of us don't do half that shit. why? cause we're lazy.

Another example is any number of the slang terms people use for tattoos and the act of getting tattooed. When someone tells me they want to get 'a tat' or 'tatted' or 'inked up' or pretty much anything other than simply 'I'd like to get a tattoo' my skin kind of crawls. it's not that i'm being judgmental, it's just that these are terms that no one in the industry uses. maybe people who work in their kitchens, or a meth trailer, but no one that i've ever come in contact with. this means at some point there was a great schism and the general public somehow adopted an entire tattooing related vocabulary completely devoid of any actual relation to tattooers. that's fucking weird. no other professional deals with this. people don't have their own slang terms for dealing with architects or plumbers. no one says 'yeah, i need to get my roof shing'd' or 'i need some chair time to get my tooth drilled on'. why us? and what is the point of all this?

When i said i didn't know anyone in the industry who used those terms, i lied. everyone i know says them. we say them everyday, just not to you. we say them as an inside joke. a rite of passage of sorts. we've even taken some of them further, taking your malapropisms and expanding upon them. coming up with our own terms, based on your terms, which were based on seemingly nothing. I realize this shit is getting a bit heavy, schindlers list on a first date, so i'll get to the point:

This tattoo is on my fellow tat-bro, Aaron. You're not allowed to call him that though, tat-bro is our word. we took it from you and you can't have it back. sorry.